For Phone and Video in General Practice

Pressures in General Practice to migrate telephone systems to the cloud (or VoIP) are increasing as BT intend to start withdrawing older ISDN connections from next year. The benefits of a VoIP system are becoming necessities as practices start working at scale and sharing resources. New technology which integrates with video and clinical systems greatly improves phone communication with patients and other healthcare professionals.

Deploying VoIP systems, whether rolled out at scale or at a smaller group of practices, requires decisions to be made, not only on vendor, but on how the telephony (and video) function is connected to the network. Such decisions can impact performance, resilience, data security and vendor lock-in. There is not always a 'right' answer and this paper discusses some of the factors to consider.

The conclusion is that, whichever connectivity method is used, the overriding decision factor should be to choose a future proof communication platform that is fit for the needs of General Practice, provides value for money and is supported by an organisation that can manage a rollout at scale. How it connects is an important but secondary consideration.

A typical legacy practice will have separate phone and data connections, with the phone system (PBX) being on premise and connected via ISDN lines to the BT Exchange and data connectivity on the N3 network. There may be other odd phone lines supporting soon-to-be-axed fax, alarms and other miscellanea. There could be additional data (broadband) lines supporting public wifi or other services: 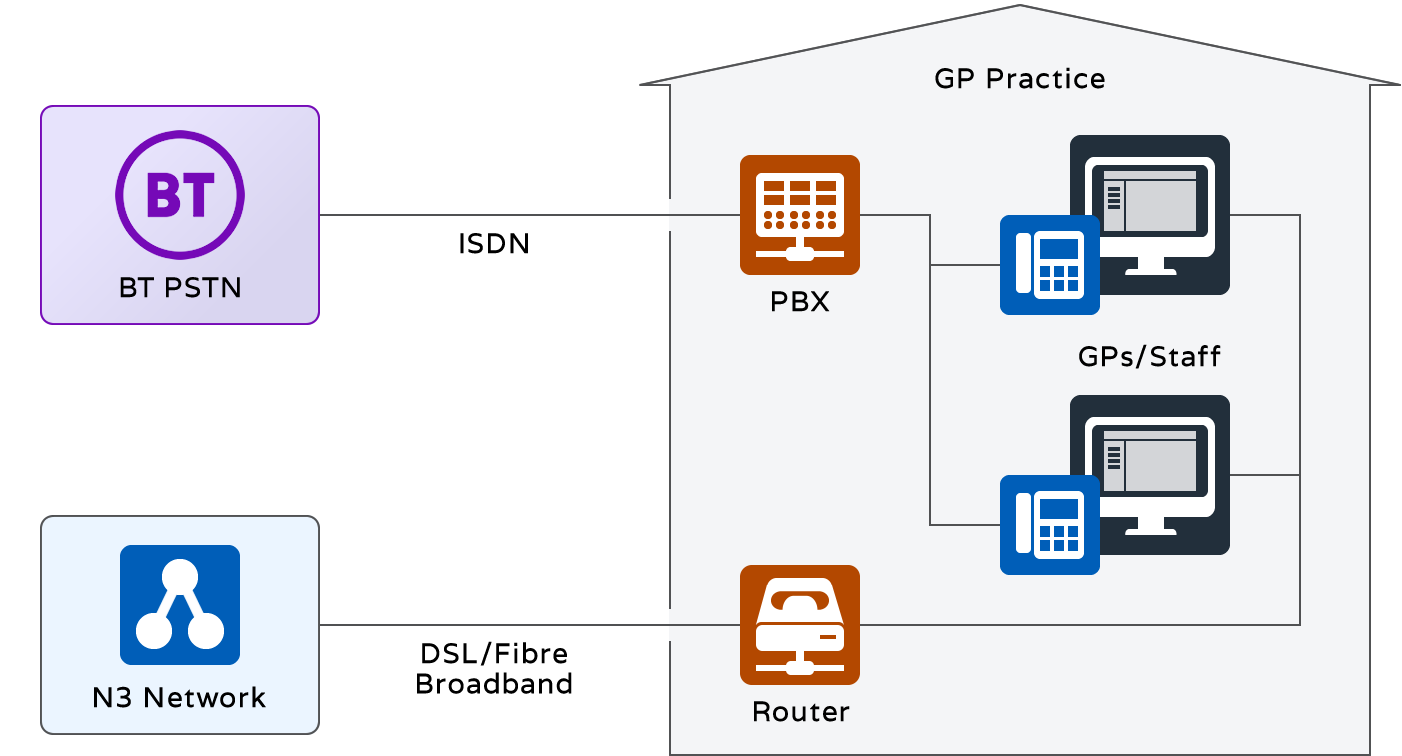 Since voice and data use separate connections, staff with IT responsibilities are not challenged with the burden of responsibility for ensuring sufficient bandwidth is available for both, or managing contention between the two. However the limited number of 'lines' offered by ISDN connections is a particular issue in practices where inbound calls persistently exceeded capacity. Problems obtaining outbound lines are frequent and network call queuing is, at best, a rudimentary solution to call management.

Anyway, ISDN is officially on the way out, has served well and it is best not to speak ill of the near-departed. ISDN circuits are pretty reliable on the whole. However, it is now possible to guarantee bandwidth per call which eliminates the call quality issues that dogged early VoIP deployments.

Half Way House - the IP PBX

Phone System vendors are not enamoured with progress towards cloud solutions and have invented the IP PBX as a solution for the unwary. It essentially keeps the logic of the phone system in a box on site, but does away with the ISDN circuits in favour of an arbitrary construct called a 'SIP Trunk'. This is essentially some data bandwidth allocated to a number of reserved channels, each of which is effectively a phone line. By using a data connection, the argument goes that you are saving duplication and cutting call costs by using a potentially cheaper provider: 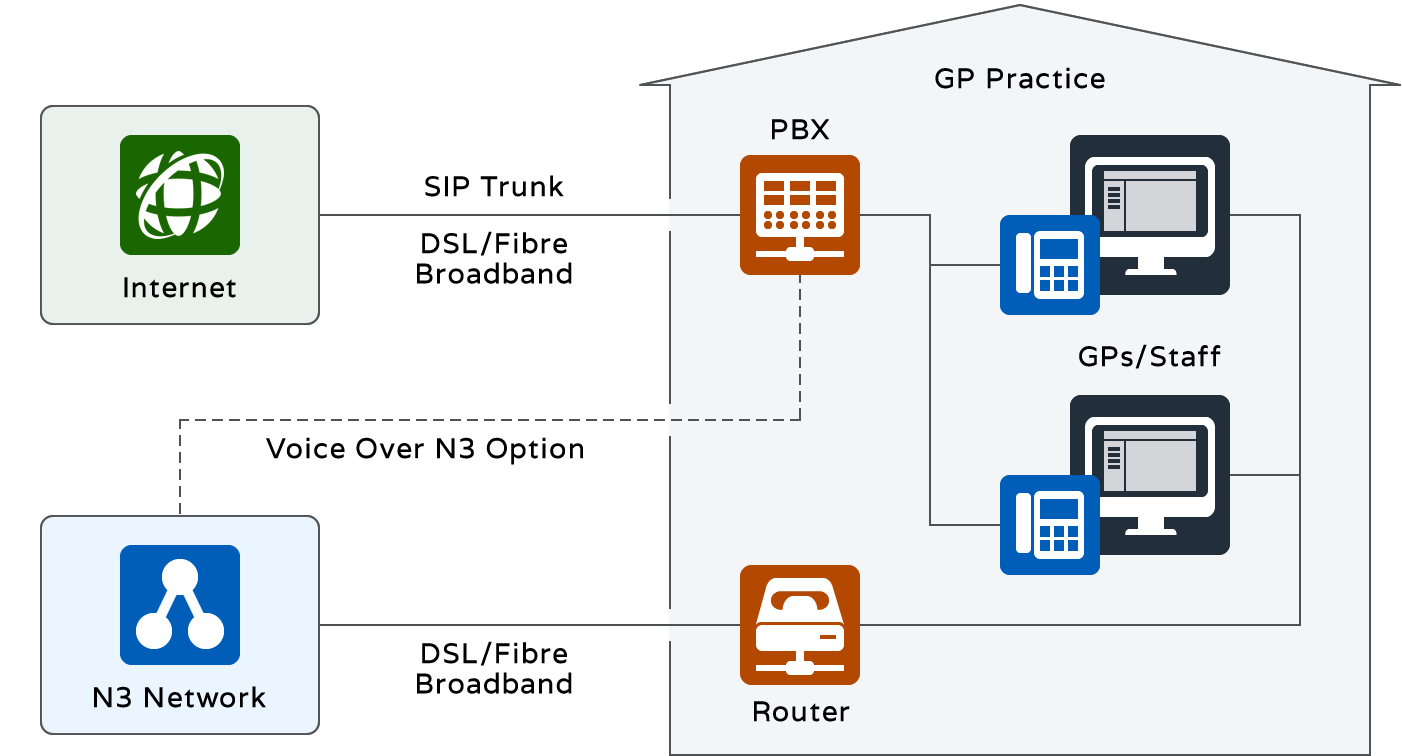 For General Practice this is a solution with almost no perceptible merit:

Essentially, the IP PBX is a way for hardware vendors to cling to market share in the face of the inevitable.

Benefits and Challenges of the Voice Cloud

The benefits of a cloud VoIP solution are well documented, but a quick summary below is of particular relevance to General Practice:

Although cloud telephony has been around for a while, there is a very broad range of products available ranging from basic 'commodity' VoIP with a standard set of features, through to very mature products which have been designed to meet the specific needs of the markets they serve. Vendors also have a range of experience in deploying their products within certain environments and General Practice has a peculiar set of requirements and calling patterns that make it pretty much unique.

Choosing a product should not predicate the choice of connectivity and it is a key message of the NHS Long Term Plan that interoperability is a deliverable, without which the acceleration in IT-lead efficiency will not happen.

The remainder of this paper considers the three most common connectivity architectures and the merits of each.

For many practices wishing to upgrade their telephony in the short term, the Broadband option is the only one available, particularly if they are awaiting deployment of HSCN connections. In this case, the cloud telephony provider should take responsibility for the connectivity: 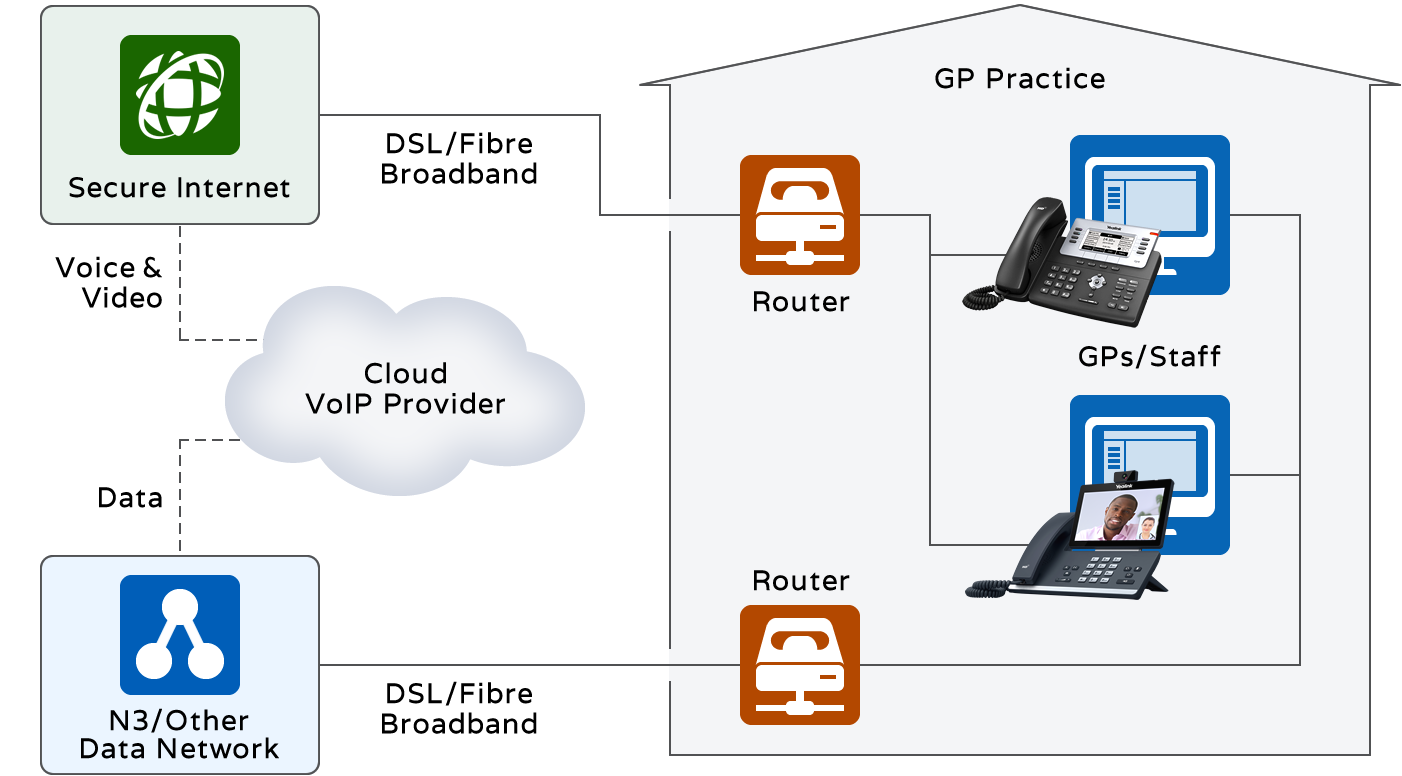 A separate connection for voice and video can make sense even where data connections are considered adequate.

If the alternative is to share the telephony connectivity with data, and the data connection does not allow Quality of Service to be defined (QoS, which marks some traffic as high priority), there is likely to be trouble ahead. A burst of data activity will likely cause call or video packets to be delayed and a breakup of conversations (contention).

The rollout of the Health and Social Care Network (HSCN) is vaunted as a solution to the problems of the creaking N3 network. As such, new HSCN networks are likely to be specified with considerably higher bandwidth and suppliers will provision with QoS to permit voice and video traffic to share connections with data. HSCN Suppliers may try to include their own cloud telephony solution, but a purchaser is not bound to any particular product. A generalised solution may look as follows, with breakout to the Internet being potentially shared by a group of practices sharing a master contract. The same applies to a Community of Interest Network (CoIN) which predates HSCN and tends to be a collaborative purchasing exercise: 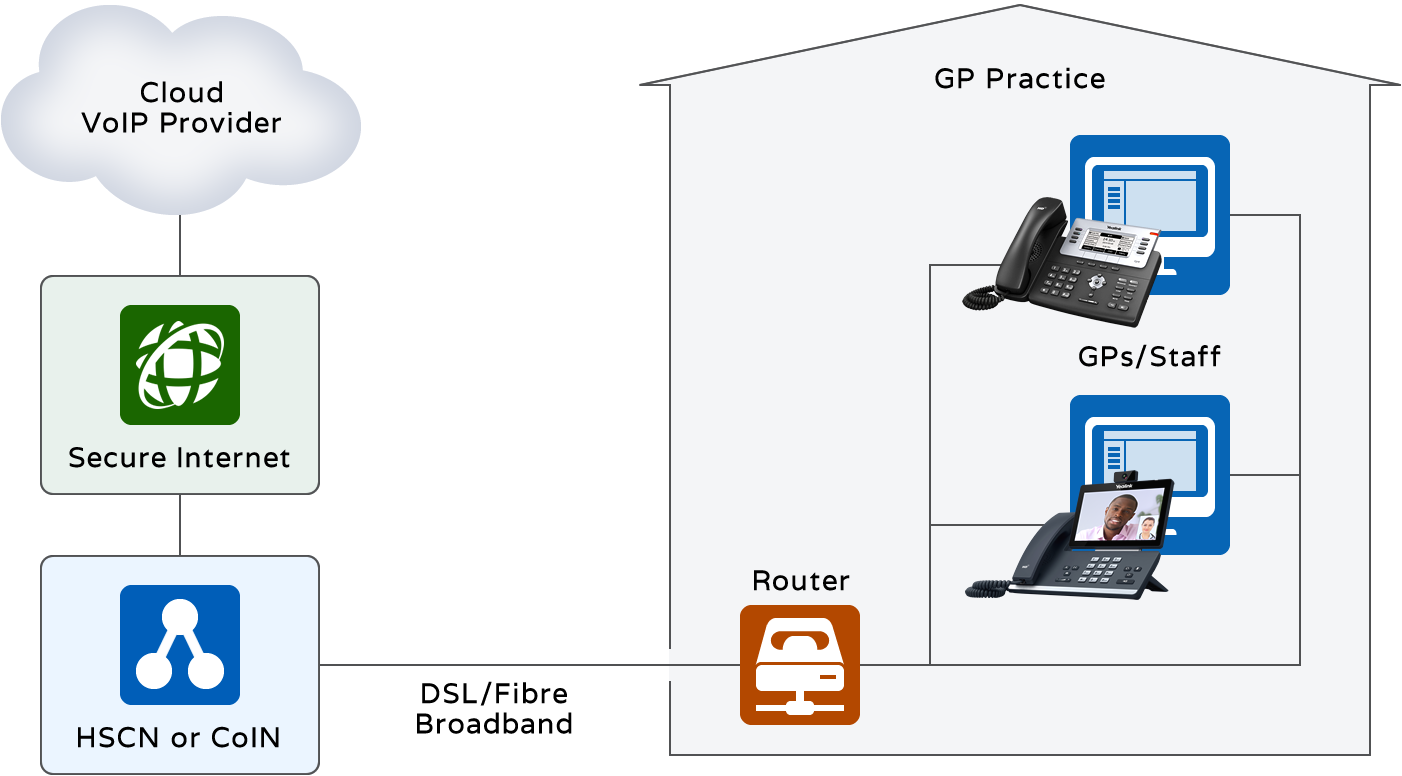 This immediately looks a simplified and more appealing solution, with the benefits that:

However the solution is not always the preferred one and CCGs rolling out HSCN have made informed choices to keep voice, and potentially video, on separate networks. Some of the reasons cited include the following:

A combination of the above factors may mean that a purchaser either chooses to separate the provision of data and voice networks, or to provide voice and video over the HSCN/CoIN Network by engaging with a specialist supplier.

Although this is effectively a variation to Option 2, some purchasers have made a decision to provide an end-to-end private network between the Cloud Voice provider's network and the healthcare network as below: 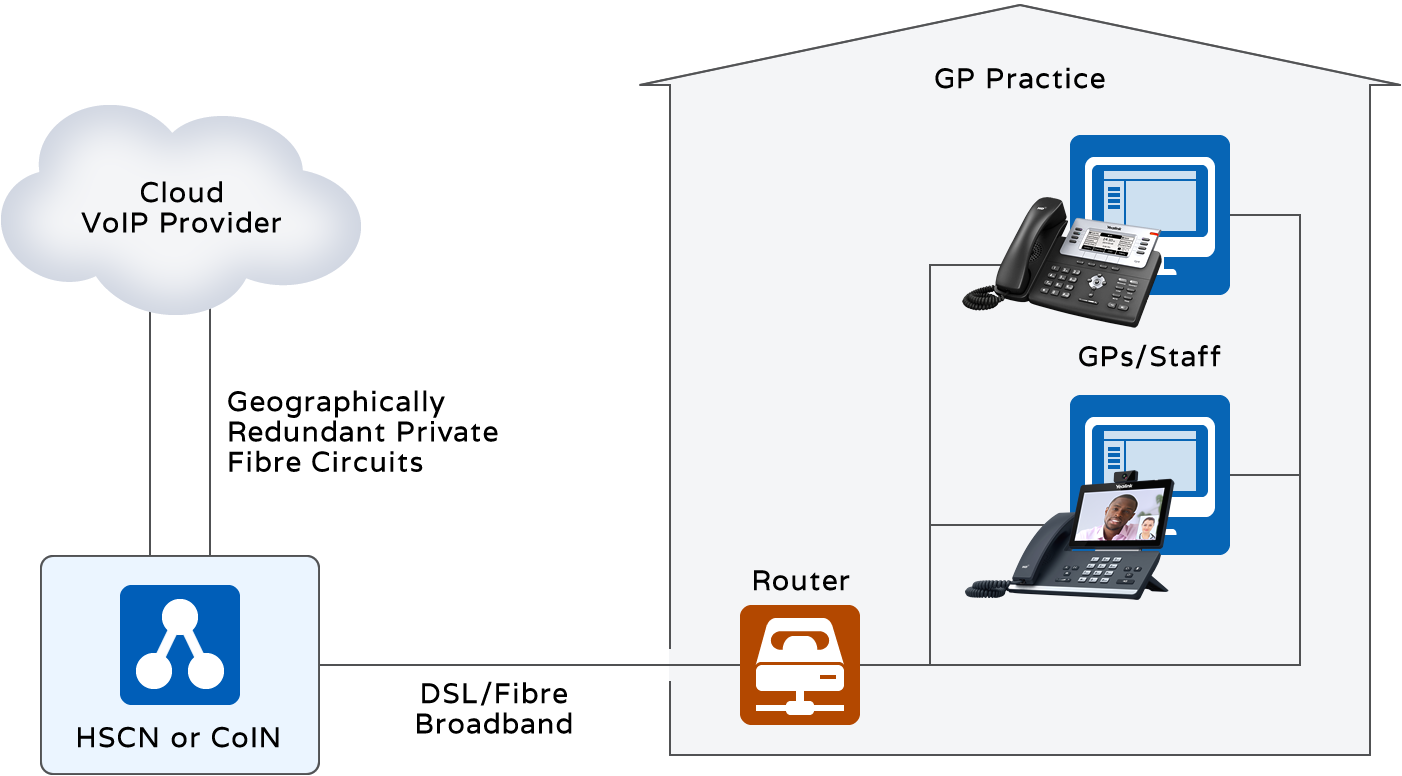 This shows two connections to the voice network for resilience.

The reasons for choosing a completely private voice/video network are likely to be:

It is arguable that these factors alone are not sufficient to incur the considerable overhead of configuring and testing what can be a complex network. From a security perspective, by choosing a supplier who offers encrypted voice calls (both SIP and media, SRTP) there is no reason to add the extra layer of a fully private network. Furthermore, with the prevalence of SIP being the transport of choice amongst network providers, many calls will in any case traverse the Internet before reaching their final destination.

From a bandwidth perspective, the Internet is very rarely responsible for packet loss and call quality degradation which normally occurs at the 'last mile' to the premises. With careful peering between the networks, the shortest paths can be configured.

The most likely justification for this configuration is when the Internet breakout capacity is limited by contract at the network end and it is more economical to provide a private connection than to increase capacity.

Before concluding, it's worth noting some information about the use of video in general practice, both from the perspective of providing patient consultations and video conferencing - the latter, typically small groups of clinicians.

Data shows that the takeup of video consultations by patients is very low in comparison with phone and face-to-face and it is unlikely that, even in a very large practice, more than one video consultation is happening simultaneously. This may change over time, of course. However, when comparing typical video bandwidth of a call between a desktop video handset and a patient smartphone, it will not exceed more than four times the overhead of a single high definition voice call. In short, provisioning sufficient bandwidth for video should not significantly impact the decisions on how connectivity is provided or being influenced to over-provide bandwidth.

Another factor here is that video consultations, when they do occur, often start off as voice calls. This means that a close integration between the VoIP solution and the video call is essential for smooth working practices. Often this will include integration with clinical systems and online patient access.

Finally, it is worth considering that the devices used in general practice for telephony (known as 'phones' in old parlance) do not generally lend themselves to being on the PC desktop as softphones, neither at reception nor in GP consultations. Physical separation of the phones from the clinical system and other PC application is a convenience from a working practice perspective and potentially also a security perspective. This does not prevent them being integrated via software links.

The following questions may be useful when making a decision on a network plan for voice and video:

A competent telephony supplier should be able to work with different network designs, however the conclusion remains as per the synopsis.

Whichever connectivity method is used, the overriding decision factor should be to choose a future proof communication platform that is fit for the needs of General Practice, provides value for money and is supported by an organisation that can manage a rollout at scale. How it connects is an important but secondary consideration.